The SEO world erupted on Tuesday, December 12th, as Google announced updates to their world famous SEO Starter Guide and Webmaster Academy, the most recent update since a small (and largely unnoticed) update in 2010. To keep you abreast with the newest in SEO, we’ve broken down the important SEO Starter Guide changes below.

One of the biggest moves Google is making with their SEO Starter Guide updates is the removal of the Webmaster Academy and the old Starter Guide. The old Starter Guide “lists best practices that make it easier for search engines to crawl, index and understand content on websites.” The Webmaster Academy has served as a source of information and tools to teach webmasters how to create a site and have it found on Google. Though these have both been extremely valuable over the years, the two together have a significant amount of overlapping information, and several areas with little or no information that should be fleshed out. The new SEO Starter Guide will replace these resources, and will solve the problems of missing or redundant information.

In the seven years since last they updated, the world has changed enormously. The first and foremost change that influenced this new guide was the increase in mobile use. In the first five years since the SEO Starter Guide was last updated (2010 to 2015) hours of internet use on desktop remained almost uniform, but mobile increased 600%.

Google acknowledges that the majority of searches now happen on mobile, and so they have overhauled their mobile section, updating the information to reflect the new mobile world. They have removed much of the advice they once gave about SEO for mobile-versions of a site, as the popular (and Google recommended) practice is now to create a single responsive site.

In the section, they have also put links to some of the best evaluation tools Google offers for the betterment of mobile sites, like the Mobile Friendliness Test and Mobile Usability report. Google also encourages users to make their mobile sites as user friendly as possible and mentions newer innovations like AMP pages, as well as linking users to their full mobile guide.

Google has also added a warning about using links, something that was missing from previous versions of the SEO Starter Guide. The ecosystem of links is essential for SEO, but since its creation, there have been abuses. Google finally addresses the caution that needs to be taken when linking.

“Be careful who you link to. You can confer some of your site’s reputation to another site when your site links to it.”

The guide also goes over some of the common ways that links are abused, such as when unconscientious users add links to their own site in your comment sections or message boards. Thankfully, Google also describes how to use nofollow to put a stop to this, and other, negative linking practices.

What You Won’t Find In The New Google SEO Starter Guide: ?

With that, we only have one thing left to say: We’ll miss you Google Bot. Yes, the beloved SEO Starter Guide robot is retired in this updated version. 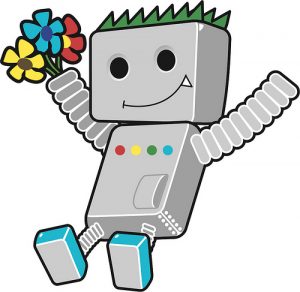 Subscribe to our blog and get awesome updates and insights on a weekly basis. No Spam. No BS.